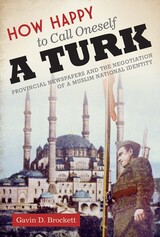 The modern nation-state of Turkey was established in 1923, but when and how did its citizens begin to identify themselves as Turks? Mustafa Kemal Atatürk, Turkey's founding president, is almost universally credited with creating a Turkish national identity through his revolutionary program to "secularize" the former heartland of the Ottoman Empire. Yet, despite Turkey's status as the lone secular state in the Muslim Middle East, religion remains a powerful force in Turkish society, and the country today is governed by a democratically elected political party with a distinctly religious (Islamist) orientation.

In this history, Gavin D. Brockett takes a fresh look at the formation of Turkish national identity, focusing on the relationship between Islam and nationalism and the process through which a "religious national identity" emerged. Challenging the orthodoxy that Atatürk and the political elite imposed a sense of national identity from the top down, Brockett examines the social and political debates in provincial newspapers from around the country. He shows that the unprecedented expansion of print media in Turkey between 1945 and 1954, which followed the end of strict, single-party authoritarian government, created a forum in which ordinary people could inject popular religious identities into the new Turkish nationalism. Brockett makes a convincing case that it was this fruitful negotiation between secular nationalism and Islam—rather than the imposition of secularism alone—that created the modern Turkish national identity.

Gavin D. Brockett is Associate Professor of Middle East and Islamic History at Wilfrid Laurier University. He is editor, with Touraj Atabaki, of Ottoman and Republican Turkish Labour History.