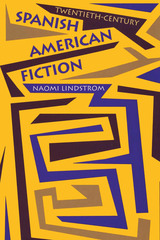 Spanish American fiction became a world phenomenon in the twentieth century through multilanguage translations of such novels as Gabriel Garcia Marquez's One Hundred Years of Solitude, Manuel Puig's Kiss of the Spider Woman, Octavio Paz's Labyrinth of Solitude, and Isabel Allende's House of the Spirits. Yet these "blockbusters" are only a tiny fraction of the total, rich outpouring of Spanish-language literature from Latin America.

In this book, Naomi Lindstrom offers English-language readers a comprehensive survey of the century's literary production in Latin America (excluding Brazil). Discussing movements and trends, she places the famous masterworks in historical perspective and highlights authors and works that deserve a wider readership. Her study begins with Rodó's famous essay Ariel and ends with Rigoberta Menchú's 1992 achievement of the Nobel Prize. Her selection of works is designed to draw attention, whenever possible, to works that are available in good English translations.

A special feature of the book is its treatment of the "postboom" period. In this important concluding section, Lindstrom discusses documentary narratives, the new interrelations between popular culture and literary writing, and underrepresented groups such as youth cultures, slum dwellers, gays and lesbians, and ethnic enclaves. Written in accessible, nonspecialized language, Twentieth-Century Spanish American Fiction will be equally useful for general readers as a broad overview of this vibrant literature and for scholars as a reliable reference work.

AUTHOR BIOGRAPHY
Naomi Lindstrom is Professor of Spanish and Portuguese at the University of Texas at Austin.
TABLE OF CONTENTS