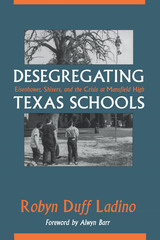 In the famous Brown v. the Board of Education decisions of 1954 and 1955, the United States Supreme Court ruled that "separate but equal" schools for black and white students were unconstitutional. Yet history records that it took more than a decade of legal battles, civil rights protests, and, tragically, violent confrontations before black students gained full access to previously white schools.

Mansfield, Texas, a small community southeast of Fort Worth, was the scene of an early school integration attempt. In this book, Robyn Duff Ladino draws on interviews with surviving participants, media reports, and archival research to provide the first full account of the Mansfield school integration crisis of 1956.

Ladino explores how power politics at the local, state, and federal levels ultimately prevented the integration of Mansfield High School in 1956. Her research sheds new light on the actions of Governor Allan Shivers—who, in the eyes of the segregationists, actually validated their cause by his political actions—and it underscores President Dwight Eisenhower's public passivity toward civil rights during his first term of office.

Despite the short-term failure, however, the Mansfield school integration crisis helped pave the way for the successful integration of Central High School in Little Rock, Arkansas, in 1957. Thus, it deserves a permanent place in the history of the civil rights movement, which this book amply provides.