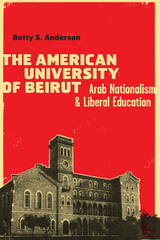 Since the American University of Beirut opened its doors in 1866, the campus has stood at the intersection of a rapidly changing American educational project for the Middle East and an ongoing student quest for Arab national identity and empowerment. Betty S. Anderson provides a unique and comprehensive analysis of how the school shifted from a missionary institution providing a curriculum in Arabic to one offering an English-language American liberal education extolling freedom of speech and analytical discovery. Anderson discusses how generations of students demanded that they be considered legitimate voices of authority over their own education; increasingly, these students sought to introduce into their classrooms the real-life political issues raging in the Arab world. The Darwin Affair of 1882, the introduction of coeducation in the 1920s, the Arab nationalist protests of the late 1940s and early 1950s, and the even larger protests of the 1970s all challenged the Americans and Arabs to fashion an educational program relevant to a student body constantly bombarded with political and social change. Anderson reveals that the two groups chose to develop a program that combined American goals for liberal education with an Arab student demand that the educational experience remain relevant to their lives outside the school’s walls. As a result, in eras of both cooperation and conflict, the American leaders and the students at the school have made this American institution of the Arab world and of Beirut.
AUTHOR BIOGRAPHY
BETTY S. ANDERSONAnderson is Associate Professor of Middle East History at Boston University. She is the author of Nationalist Voices in Jordan: The Street and the State, as well as numerous articles on Middle Eastern education, politics, and nationalism.
TABLE OF CONTENTS