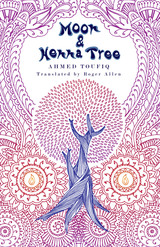 Moon and Henna Tree
by Ahmed Toufiq
translated by Roger Allen
University of Texas Press, 2013
Paper: 978-0-292-74824-8
Set in the High Atlas in pre-modern Morocco, Moon and Henna Tree chronicles the rise and fall of a local potentate, Hmmu. Not content with the territory left to him upon his father’s death, Hmmu, under the influence of his scheming advisor, Ibn al-Zara, begins a campaign to acquire those lands that adjoin his, either through marriage or physical force. Ahmed Toufiq’s subtle investigation of the abuse of power and its effects on those who suffer under its tyranny also provides a unique look at Amazigh (Berber) culture. While most of Toufiq’s contemporaries focus on modern urban Morocco, he provides a fascinating, and accurate, account of the customs and traditions of a large, yet often ignored, segment of the population. Moon and Henna Tree (in the original Arabic) won the Moroccan Book Prize in 1989.
AUTHOR BIOGRAPHY
AHMED TOUFIQRabat, MoroccoToufiq is the Minister of Religious Affairs and Endowments for Morocco. Trained as both a historian and philologist, he is the author of works on pre-modern Moroccan history and the editor of significant source texts in religion and history. Abu Musa’s Women Neighbors: A Historical Novel from Morocco was the first of his novels to be translated into English.ROGER ALLENPhiladelphia, PennsylvaniaAllen is Professor Emeritus of Arabic and Comparative Literature at the University of Pennsylvania. He has translated several Arabic novels into English, including Abu Musa’s Women Neighbors, and is the author of The Arabic Novel: An Historical and Critical Introduction.