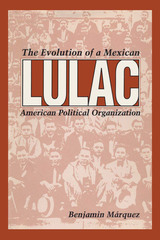 The League of United Latin American Citizens (LULAC) is one of the best-known and active national organizations that represent Mexican Americans and their political interests. Since its founding in Corpus Christi, Texas, in 1929, it has served as a vehicle through which Mexican Americans can strive for equal rights and economic assimilation into Anglo American society.

This study is the first comprehensive political history of LULAC from its founding through the 1980s. Márquez explores the group’s evolution from an activist, grassroots organization in the pre– and post–World War II periods to its current status as an institutionalized bureaucracy that relies heavily on outside funding to further its politically conservative goals. His information is based in part on many primary source materials from the LULAC archives at the University of Texas at Austin, the Houston Public Library, and the University LULAC publications, as well as interviews with present and past LULAC activists.

Márquez places this history within the larger theoretical framework of incentive theory to show how changing, and sometimes declining, membership rewards have influenced people’s participation in LULAC and other interest groups over time. Ironically, as of 1988, LULAC could claim fewer than 5,000 dues-paying members, yet a dedicated and skillful leadership secured sufficient government and corporate monies to make LULAC one of the most visible and active groups in Mexican American politics.

Given the increasing number of interest groups and political action committees involved in national politics in the United States, this case study of a political organization’s evolution will be of interest to a wide audience in the political and social sciences, as well as to students of Mexican American and ethnic studies.

AUTHOR BIOGRAPHY
Benjamin Márquez is Professor of Political Science at the University of Wisconsin at Madison.
REVIEWS
. . . no other Mexican American organization rivals LULAC in its longevity and national visibility. . . . this book offers the first comprehensive scholarly study of this organization, drawing importantly from archival material and organization documents.
— Christine Marie Sierra, Associate Professor of Political Science, University of New Mexico