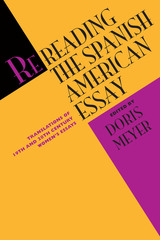 Latin American intellectual history is largely founded on essayistic writing. Women’s essays have always formed a part of this rich tradition, yet they have seldom received the respect they merit and are often omitted entirely from anthologies. This volume and its earlier companion, Reinterpreting the Spanish American Essay: Women Writers of the 19th and 20th Centuries, seek to remedy that neglect. This book collects thirty-six notable essays by twenty-two women writers, including Flora Tristan, Gertrudis Gómez de Avellaneda, Clorinda Matto de Turner, Victoria Ocampo, Alfonsina Storni, Rosario Ferré, Christina Peri Rossi, and Elena Poniatowska. All of the essays are here translated into English for the first time, many by the same scholars who wrote critical studies of the authors in the first volume. Each author’s work is also prefaced by a brief biographical sketch.
AUTHOR BIOGRAPHY
Doris Meyer is the Roman S. and Tatiana Weller Professor of Hispanic Studies at Connecticut College. She is the author of numerous articles and books, including Victoria Ocampo: Against the Wind and the Tide (UT Press).
TABLE OF CONTENTS