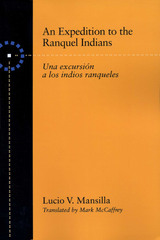 The encounter between Native American peoples and Europeans and their descendants has marked the history of every nation in the Americas, both North and South. Lucio Mansilla’s Una excursión a los indios ranqueles, published in Argentina in 1870, is one of very few works in American letters that presents a vivid, firsthand account of a noncombative encounter between Native American and European civilizations. This volume is the first English translation of Mansilla’s classic work. Long noted for its humor, adventurousness, and narrative ingenuity, the book offers penetrating insights into fundamental issues of "civilization and barbarism," immigration, ethnic and racial diversity, and land ownership and tenancy. Mansilla alone among his contemporaries espoused open dialogue as the best approach to the "Indian problem." Although the peace accord he sought to enact with the Ranquels was summarily disregarded by the Argentine government, which slowly gravitated towards a policy of ethnic cleansing and expropriation of Indian lands, the Expedition does narrate a rehearsal for a reconciliation that in the end never took place.
AUTHOR BIOGRAPHY
Lucio V. Mansilla (1831–1913), a colonel in the Argentine army, was a diarist and essayist who dealt with the political problem of assimilating indigenous people. Translator Mark McCaffrey holds a Ph.D. from the University of California, San Diego.
TABLE OF CONTENTS