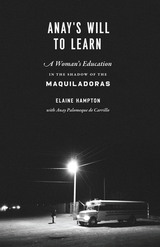 The opening of free trade agreements in the 1980s caused major economic changes in Mexico and the United States. These economic activities spawned dramatic social changes in Mexican society. One young Mexican woman, Anay Palomeque de Carrillo, rode the tumultuous wave of these economic activities from her rural home in tropical southern Mexico to the factories in the harsh desert lands of Ciudad Juárez during the early years of the city’s notorious violence.

During her years as an education professor at the University of Texas at El Paso, author Elaine Hampton researched Mexican education in border factory (maquiladora) communities. On one trip across the border into Ciudad Juárez, she met Anay, who became her guide in uncovering the complexities of a factory laborer’s experiences in these turbulent times.

Hampton here provides an exploration of education in an era of dramatic social and economic upheaval in rural and urban Mexico. This critical ethnographic case study presents Anay’s experiences in a series of narrative essays addressing the economic, social, and political context of her world. This young Mexican woman leads us through Ciudad Juárez in its most violent years, into women’s experiences in the factories, around family and religious commitments as well as personal illness, and on to her achievement of an education through perseverance and creativity.

Elaine Hampton is a retired Associate Professor of Education at the University of Texas at El Paso. She was an award-winning teacher in communities near the Mexican border and is a researcher in the fields of Mexican and Mexican-American education.