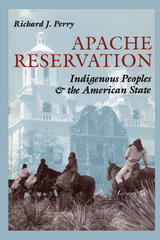 “Indian reservations” were the United States’ ultimate solution to the “problem” of what to do with native peoples who already occupied the western lands that Anglo settlers wanted. In this broadly inclusive study, Richard J. Perry considers the historical development of the reservation system and its contemporary relationship to the American state, with comparisons to similar phenomena in Canada, Australia, and South Africa. The San Carlos Apache Reservation of Arizona provides the lens through which Perry views reservation issues. One of the oldest and largest reservations, its location in a minerals- and metals-rich area has often brought it into conflict with powerful private and governmental interests. Indeed, Perry argues that the reservation system is best understood in terms of competition for resources among interest groups through time within the hegemony of the state. He asserts that full control over their resources—and hence, over their lives—would address many of the Apache’s contemporary economic problems.
AUTHOR BIOGRAPHY
Richard J. Perry is Emeritus Professor of Anthropology at St. Lawrence University, where he taught from 1971 to 2004 and was founding Chair of the Department of Anthropology, serving as chair for sixteen years.
TABLE OF CONTENTS