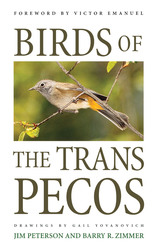 Birds of the Trans-Pecos
by Jim Peterson and Barry R. Zimmer
introduction by Victor Emanuel
illustrated by Gail Diane Yovanovich

The Trans-Pecos, that huge region of Texas west of the Pecos River, is richer in recorded bird species than all but three of the United States. Hundreds of birders come here each year in search of species such as the Colima Warbler which are rarely if ever spotted in other parts of the country. Yet, until now, there was no comprehensive birding guide devoted to the entire region. Designed for intermediate to advanced birders, Birds of the Trans-Pecos provides an annotated checklist of all 482 species found in the region. The species accounts include seasonal distribution, documentation of nesting, most likely habitat, and the bird’s status as a "Texas Review Species." The authors also describe the geography and bird habitats of the Trans-Pecos; federal and state parklands in the area (including Big Bend and Guadalupe Mountains), with the species that occur in each; and the mountain-breeding birds and species of special interest.
AUTHOR BIOGRAPHY
Formerly Curator of Ornithology at the Dallas Museum of Natural History, where he led birdwatching tours throughout Central and South America, Jim Peterson is now Director of Technology at the Episcopal School of Dallas. Barry R. Zimmer, of El Paso, is a
TABLE OF CONTENTS


List of Illustrations and TablesForeword by Victor EmanuelPrefaceAcknowledgmentsAbout the Book THE TRANS-PECOSThe Geography The Nesting Birds of the Trans-Pecos MountainsThe Parks, Reservoirs, and Recreational LakesThe Human Element THE TRANS-PECOS BIRDSAn Annotated List of SpeciesThe Seasonal Distribution of Trans-Pecos BirdsSpecies of Special InterestBibliography Index