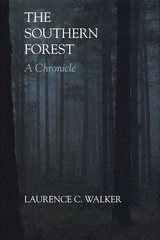 When the first European explorers reached the southern shores of North America in the early seventeenth century, they faced a solid forest that stretched all the way from the Atlantic coast to eastern Texas and Oklahoma. The ways in which they and their descendants used—and abused—the forest over the next nearly four hundred years form the subject of The Southern Forest.

In chapters on the explorers, pioneers, lumbermen, boatbuilders, and foresters, Laurence Walker chronicles the constant demands that people have made on forest resources in the South. He shows how the land's very abundance became its greatest liability, as people overhunted the animals, clearcut the forests, and wore out the soil with unwise farming practices—all in a mistaken belief that the forest's bounty (including new ground to be broken) was inexhaustible.

With the advent of professional forestry in the twentieth century, however, the southern forest has made a comeback. A professional forester himself, Walker speaks from experience of the difficulties that foresters face in balancing competing interests in the forest. How, for example, does one reconcile the country's growing demand for paper products with the insistence of environmental groups that no trees be cut? Should national forests be strictly recreational areas, or can they support some industrial logging? How do foresters avoid using chemical pesticides when the public protests such natural management practices as prescribed burning and tree cutting?

This personal view of the southern forest adds a new dimension to the study of southern history and culture. The primeval southern forest is gone, but, with careful husbandry on the part of all users, the regenerated southern forest may indeed prove to be the inexhaustible resource of which our ancestors dreamed.

AUTHOR BIOGRAPHY
The late Laurence C. Walker enjoyed a fifty-year career in forest management, research, and instruction. He was Lacy Hunt Professor of Forestry at Stephen F. Austin State University.
REVIEWS
. . . as much a commentary on Southern culture as it is on Southern forests.
— Henry C. Dethloff, Professor of History, Texas A&M University