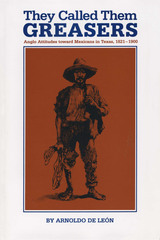 Tension between Anglos and Tejanos has existed in the Lone Star State since the earliest settlements. Such antagonism has produced friction between the two peoples, and whites have expressed their hostility toward Mexican Americans unabashedly and at times violently.

This seminal work in the historical literature of race relations in Texas examines the attitudes of whites toward Mexicans in nineteenth-century Texas. For some, it will be disturbing reading. But its unpleasant revelations are based on extensive and thoughtful research into Texas' past. The result is important reading not merely for historians but for all who are concerned with the history of ethnic relations in our state.

They Called Them Greasers argues forcefully that many who have written about Texas's past—including such luminaries as Walter Prescott Webb, Eugene C. Barker, and Rupert N. Richardson—have exhibited, in fact and interpretation, both deficiencies of research and detectable bias when their work has dealt with Anglo-Mexican relations. De León asserts that these historians overlooled an austere Anglo moral code which saw the morality of Tejanos as "defective" and that they described without censure a society that permitted traditional violence to continue because that violence allowed Anglos to keep ethnic minorities "in their place."

De León's approach is psychohistorical. Many Anglos in nineteenth-century Texas saw Tejanos as lazy, lewd, un-American, subhuman. In De León's view, these attitudes were the product of a conviction that dark-skinned people were racially and culturally inferior, of a desire to see in others qualities that Anglos preferred not to see in themselves, and of a need to associate Mexicans with disorder so as to justify their continued subjugation.

REVIEWS
This well-written, comprehensive account of Anglo-American stereotypes of Mexicans in nineteenth-century Texas makes for interesting reading. . . . As the author notes, the heritage of the past still persists. Mexican Americans in Texas are no longer lynched, but they continue to be 'victims of psychological violence in the more subtle form of discrimination.'
— American Studies