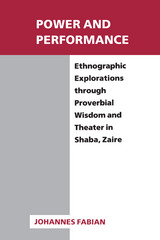 In 1985 Johannes Fabian, while engaged in fieldwork in the Shaba province of Zaire, first encountered this saying. Its implications—for the charismatic religious movements Fabian was examining, for the highly charged political atmosphere of Zaire, and for the cultures of the Luba peoples—continued to intrigue him, though its meaning remained elusive.  On a later visit, he mentioned the saying to a company of popular actors, and triggered an ethnographic brainstorm.  “Spontaneously, they decided it would be just the right topic for their next play.  On the spot they began planning—suggestions for a plot were made, problems of translating the French term ‘pouvoir’ were debated, several actors cited sayings and customs from their home villages. . . .”

Power and Performance examines traditional proverbs about power as it illustrates how the performance of Le pouvoir se mange entier was created, rehearsed, and performed. The play deals with the issue of power through a series of conflicts between villagers and their chief. Both rehearsal and performance versions of the text of this drama are included, in Swahili and in English translation.

Johannes Fabian is professor in the Department of Cultural Anthropology and Non-Western Sociology at the University of Amsterdam.  His many publications include the influential Time and the Other: How Anthropology Makes Its Object