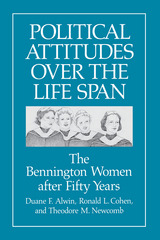 The culmination of one of the most famous long-term studies in American sociology, this examination of political attitudes among women who attended Bennington College in the 1930s and 1940s now spans five decades, from late adolescence to old age.  Theodore Newcomb’s 1930s interviews at Bennington, where the faculty held progressive views that contrasted with those of the conservative families of the students, showed that political orientations are still quite malleable in early adulthood.  The studies in 1959-60 and 1984 show the persistence of political attitudes over the adult life span:  the Bennington women, raised in conservative homes, were liberalized in their college years and have remained politically involved and liberal in their views, even in their sixties and seventies.
Here the authors analyze the earlier studies and then introduce the 1984 data.  Using data from National Election Studies for comparison, they show that the Bennington group is more liberal and hold its opinions more intensely than both older and younger Americans, with the exception of the generation that achieved political maturity in the 1960s.  The authors point out that the majority of the Bennington women’s children are of this 1945–54 generation and suggest that this factor played an important role in the stability of the women’s political views.  Within their own generation, the Bennington women also appear to hold stronger political views than other college-educated women.
Innovative in its methodology and extremely rich in its data, this work will contribute to developmental and social psychology, sociology, political science, women’s studies, and gerontology.