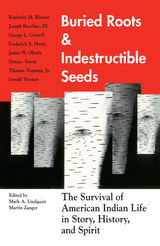 This anthology highlights central values and traditions in Native American societies, exploring the ongoing struggles and survival power of Native American people today. The essays and stories by well-known writers provide an excellent introduction for general readers as well as high school and college students. The stories and historical events are drawn especially from the tribes of the Great Lakes region, such as the Ojibwa (Chippewa) of Wisconsin, and are part of a continuing, sustaining storytelling tradition.
Starting with the opening selection, “The Circle of Stories,” which reaffirms the relationship of humans to all living things, the anthology emphasizes themes of connectedness and survival in essays on the environment, identity, community allegiance and treaty rights, marginalization and assimilation in American society, and conflict within the educational system. Several selections about Trickster tales introduce traditions of humor, irony, and imagination that have come to embody native survival, liberation, and continuance.
The authors included in Buried Roots and Indestructible Seeds are Kim Blaeser, Joseph Bruchac, George Cornell, Fred Hoxie, James Oberly, Denise Sweet, Tom Vennum, and Gerald Vizenor.