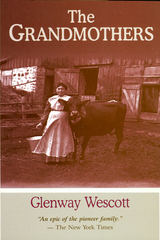 Glenway Wescott’s poignant story of nineteenth-century Wisconsin was first published in 1927 as the winner of the prestigious Harper Prize. Like F. Scott Fitzgerald and Ernest Hemingway, Wescott left the Midwest behind to live as a writer in 1920s Paris. In this novel, based on Wescott’s own life and family, the young Alwyn Tower leaves Wisconsin to travel in Europe, but finds himself haunted by a family of long-dead spirits—his grandparents and great-uncles and aunts, a generation whose young adulthood was shattered by the Civil War. Their images were preserved in fading family albums of daguerreotypes and in his own fragmented memories of stories told to him by his strong and enduring grandmothers. To disinter and finally lay to rest the family secrets that lingered insistently in his mind, Wescott writes, Alwyn was “obliged to live in imagination many lives already at an end.”
The Grandmothers is the chronicle of Alwyn’s ancestors:  the bitter Henry Tower, who returned from Civil War battlefields to find his beautiful wife Serena lost in a fatal fever; Rose Hamilton, robust and eager, who yearned to leave the cabin of her bearded, squirrel-hunting brothers for the company of courteous Leander Tower; the boy-soldier Hilary Tower, whose worship of his brother made him desperate; fastidious Nancy Tower, whose love for her husband Jesse Davis could not overcome her disgust with the dirt under his fingernails; Ursula Duff, proud and silent, maligned among her neighbors by her venal husband; Alwyn’s parents, Ralph Tower and Marianne Duff, whose happiness is brought about only by the intervention of a determined spinster.
AUTHOR BIOGRAPHY
Glenway Wescott (1901–1987) was born in Kewaskum, Wisconsin. He was raised on a farm with an extended family, and The Grandmothers was his first major literary work. Among his other books are Goodbye, Wisconsin: The Apple of the Eye: and Pilgrim Hawk. Wescott’s journals from 1937 to 1955 were published by Farrar Strauss Giroux under the title Continual Lessons in 1990.
REQUEST ACCESSIBLE FILE