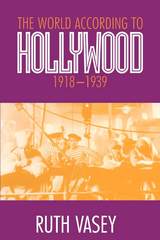 The most visible cultural institution on earth between the World Wars, the Hollywood movie industry tried to satisfy worldwide audiences of vastly different cultural, religious, and political persuasions. The World According to Hollywood  shows how the industry’s self-regulation shaped the content of films to make them salable in as many markets as possible. In the process, Hollywood created an idiosyncratic vision of the world that was glamorous and exotic, but also oddly narrow.
Ruth Vasey shows how the Motion Picture Producers and Distributors of America (MPPDA), by implementing such strategies as the industry’s Production Code, ensured that domestic and foreign distribution took place with a minimum of censorship or consumer resistance. Drawing upon MPPDA archives, studio records, trade papers, and the records of the U.S. Department of Commerce, Vasey reveals the ways the MPPDA influenced the representation of sex, violence, religion, foreign and domestic politics, corporate capitalism, ethnic minorities, and the conduct of professional classes.
Vasey is the first scholar to document fully how the demands of the global market frequently dictated film content and created the movies’ homogenized picture of social and racial characteristics, in both urban America and the world beyond. She uncovers telling evidence of scripts and treatments that were abandoned before or during the course of production because of content that might offend foreign markets. Among the fascinating points she discusses is Hollywood’s frequent use of imaginary countries as story locales, resulting from a deliberate business policy of avoiding realistic depictions of actual countries. She argues that foreign governments perceived movies not just as articles of trade, but as potential commercial and political emissaries of the United States. Just as Hollywood had to persuade its domestic audiences that its products were morally sound, its domination of world markets depended on its ability to create a culturally and politically acceptable product.

AUTHOR BIOGRAPHY
Ruth Vasey is a lecturer in the School of Theatre and Film Studies at the University of New South Wales, Australia. She is a contributor to two forthcoming books, The Oxford History of World Cinema and Movie Censorship and American Culture.
TABLE OF CONTENTS