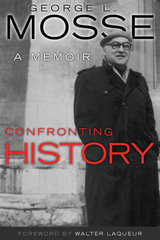 Just two weeks before his death in January 1999, George L. Mosse, one of the great American historians, finished writing his memoir, a fascinating and fluent account of a remarkable life that spanned three continents and many of the major events of the twentieth century.
Confronting History describes Mosse's opulent childhood in Weimar Berlin; his exile in Paris and England, including boarding school and study at Cambridge University; his second exile in the U.S. at Haverford, Harvard, Iowa, and Wisconsin; and his extended stays in London and Jerusalem. Mosse discusses being a Jew and his attachment to Israel and Zionism, and he addresses his gayness, his coming out, and his growing scholarly interest in issues of sexuality. This touching memoir—told with the clarity, passion, and verve that entranced thousands of Mosse's students—is guided in part by his belief that "what man is, only history tells" and, most of all, by the importance of finding one's self through the pursuit of truth and through an honest and unflinching analysis of one's place in the context of the times.
AUTHOR BIOGRAPHY
George L. Mosse (1918–99) was the John C. Bascom Professor of European History and Weinstein-Bascom Professor of Jewish Studies at the University of Wisconsin–Madison. He was also the Koebner Professor of History at the Hebrew University of Jerusalem and was selected as the first scholar-in-residence at the Holocaust Museum in Washington, D.C. He wrote more than two dozen books, including Nationalism and Sexuality, Toward the Final Solution, and Nazi Culture: Intellectual, Cultural, and Social Life in the Third Reich, also published by the University of Wisconsin Press.
REVIEWS
"A historian who redefined the interpretation of European fascism and Hitler's Germany, and who made decisive contributions to the liberal historiography of modern Europe. [George Mosse] was a man of uncommon intellectual vivacity and a great teacher."—Saul Friedländer, The New Republic


"A delightful and illuminating memoir of a man whose piercing insights changed our understanding of modern Europe."—Kirkus Reviews