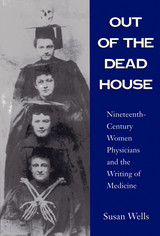 In the last decades of the nineteenth century, two thousand women physicians formed a significant and lively scientific community in the United States. Many were active writers; they participated in the development of medical record-keeping and research, and they wrote self-help books, social and political essays, fiction, and poetry. Out of the Dead House rediscovers the contributions these women made to the developing practice of medicine and to a community of women in science.
Susan Wells combines studies of medical genres, such as the patient history or the diagnostic conversation, with discussions of individual writers. The women she discusses include Ann Preston, the first woman dean of a medical college; Hannah Longshore, a successful practitioner who combined conventional and homeopathic medicine; Rebecca Crumpler, the first African American woman physician to publish a medical book; and Mary Putnam Jacobi, writer of more than 180 medical articles and several important books. Wells shows how these women learned to write, what they wrote, and how these texts were read.
Out of the Dead House also documents the ways that women doctors influenced medical discourse during the formation of the modern profession. They invented forms and strategies for medical research and writing, including methods of using survey information, taking patient histories, and telling case histories. Out of the Dead House  adds a critical episode to the developing story of women as producers and critics of culture, including scientific culture.
AUTHOR BIOGRAPHY
Susan Wells is professor of English at Temple University. She is the author of Sweet Reason: Rhetoric and the Discourses of Modernity and The Dialectics of Representation.
TABLE OF CONTENTS
Contents
Illustrations
Acknowledgments
1. Out of the Dead House
2. Medical Conversations and Medical Histories
3. Invisible Writing I: Ann Preston Invents an Institution
4. Learning to Write Medicine
5. Invisible Writing II: Hannah Longshore and the Borders of Regularity
6. Mary Putnam Jacobi: Medicine as Will and Idea
7. Forbidden Sights: Women and the Visual Economy of Medicine
Notes
Works Cited
Index
REQUEST ACCESSIBLE FILE