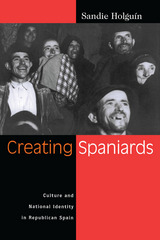 Creating Spaniards is a cultural and intellectual history that explains the intersection of politics and culture, and the formation of a national identity, during Spain’s Second Republic and Civil War. It counters recent scholarship claiming that leaders of the Second Republic had no programs for "inventing traditions" to encourage a Spanish national identity.
Focusing on the Second Republic, 1931–1936, Sandie Holguín illustrates how various intellectuals and politicians of the Republican–Socialist coalition used theater, literature, and film to aid the construction of a unified Spanish culture and history. She uses memoirs, journals, newspapers, parliamentary debates, and archival sources in her examination of the impact that cultural reforms had on the transformation of one of Europe’s oldest states.