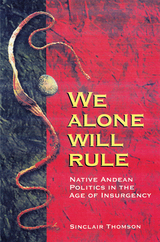 In the same era as the American, French, and Haitian revolutions, a powerful anticolonial movement swept across the highland Andes in 1780–1781. Initially unified around Túpac Amaru, a descendant of Inka royalty from Cuzco, it reached its most radical and violent phase in the region of La Paz (present-day Bolivia) where Aymara-speaking Indians waged war against Europeans under the peasant commander Túpaj Katari. The great Andean insurrection has received scant attention by historians of the "Age of Revolution," but in this book Sinclair Thomson reveals the connections between ongoing local struggles over Indian community government and a larger anticolonial movement.
AUTHOR BIOGRAPHY
Sinclair Thomson is assistant professor of history at New York University.
REVIEWS
"One of the most brilliant books written in colonial Andean history in years. It takes on an issue of immense importance, dramatically remolding our understanding of the political upheaval of the 1780s and its consequences."—Steve Stern, author of Peru’s Indian Peoples and the Challenge of Spanish Conquest