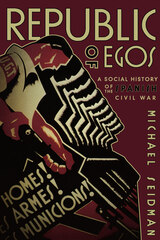 Most histories of the Spanish Civil War (1936–1939) have examined major leaders or well-established political and social groups to explore class, gender, and ideological struggles. The war in Spain was marked by momentous conflicts between democracy and dictatorship, Communism and fascism, anarchism and authoritarianism, and Catholicism and anticlericalism that still provoke our fascination.
In Republic of Egos, Michael Seidman focuses instead on the personal and individual experiences of the common men and women who were actors in a struggle that defined a generation and helped to shape our world. By examining the roles of anonymous individuals, families, and small groups who fought for their own interests and survival—and not necessarily for an abstract or revolutionary cause—Seidman reveals a powerful but rarely considered pressure on the outcome of history. He shows how price controls and inflation in the Republican zone encouraged peasant hoarding, black marketing, and unrest among urban workers. Soldiers of the Republican Army responded to material shortages by looting, deserting, and fraternizing with the enemy. Seidman’s focus on average, seemingly nonpolitical individuals provides a new vision of both the experience and outcome of the war.

Michael Seidman is professor of history at the University of North Carolina–Wilmington and author of Workers against Work: Labor in Paris and Barcelona during the Popular Fronts.