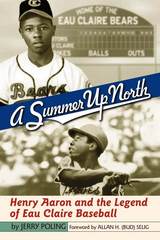 June 12, 1952—only a local sportswriter showed up at the Eau Claire airport to greet a newly signed eighteen-year-old shortstop from Alabama toting a cardboard suitcase. "I was scared as hell," said Henry Aaron, recalling his arrival as the new recruit on the city’s Class C minor league baseball team.
Forty-two years later, as Aaron approached the stadium where the Eau Claire Bears once played, an estimated five thousand people surrounded a newly raised bronze statue of a young "Hank" Aaron at bat. "I had goosebumps," he said later. "A lot of things happened to me in my twenty-three years as a ballplayer, but nothing touched me more than that day in Eau Claire." For the people of Eau Claire, Aaron’s summer two years before his Major League debut with the Milwaukee Braves symbolizes a magical time, when baseball fans in a small city in northern Wisconsin could live a part of the dream.

Jerry Poling is the news-wire editor and a columnist for the Eau Claire Leader Telegram. He is the author of Downfield: Untold Stories of the Green Bay Packers.