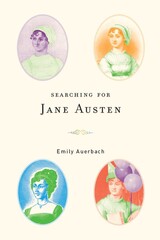 Searching for Jane Austen demolishes with wit and vivacity the often-held view of "Jane," a decorous maiden aunt writing her small drawing-room stories of teas and balls. Emily Auerbach presents a different Jane Austen—a brilliant writer who, despite the obstacles facing women of her time, worked seriously on improving her craft and became one of the world’s greatest novelists, a master of wit, irony, and character development.
In this beautifully illustrated and lively work, Auerbach surveys two centuries of editing, censoring, and distorting Austen’s life and writings. Auerbach samples Austen’s flamboyant, risqué adolescent works featuring heroines who get drunk, lie, steal, raise armies, and throw rivals out of windows. She demonstrates that Austen constantly tested and improved her skills by setting herself a new challenge in each of her six novels.
In addition, Auerbach considers Austen’s final irreverent writings, discusses her tragic death at the age of forty-one, and ferrets out ridiculous modern adaptations and illustrations, including ads, cartoons, book jackets, newspaper articles, plays, and films from our own time. An appendix reprints a ground-breaking article that introduced Mark Twain’s "Jane Austen," an unfinished and unforgettable essay in which Twain and Austen enter into mortal combat.
AUTHOR BIOGRAPHY
Emily Auerbach is professor of English at the University of Wisconsin–Madison, cohost of Wisconsin Public Radio’s University of the Air, and director of the Courage to Write series of radio documentaries on brave women writers. She has won numerous teaching, broadcasting, and arts awards and has published books, guides, and articles on nineteenth-century literature. Auerbach holds a lifetime membership in the Jane Austen Society of North America.
REVIEWS

"Emily Auerbach's approach to Jane Austen is lively, engaging, and thoroughly modern. Like Austen, Auerbach wears her wide learning lightly, and imparts a great deal of information in a most enjoyable manner. A witty, approachable introduction to Jane Austen for today's readers, using modern analytical techniques to reveal new aspects of a great writer."—Margaret Drabble, acclaimed Jane Austen scholar, author of sixteen novels, and editor of the Oxford Companion to English Literature

"Emily Auerbach writes with grace and elegance, and her prose is a pleasure to read." —Juliet McMaster, author of Jane Austen the Novelist and Jane Austen in Love

"Searching for Jane Austen is innovative, indeed revolutionary, in the best sense of the word, and will take its place as a major study of Jane Austen’s work."—Joseph Wiesenfarth, author of Gothic Manners and the Classic English Novel