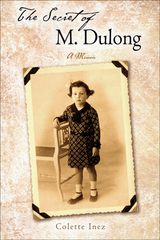 The Secret of M. Dulong: A Memoir
by Colette Inez
University of Wisconsin Press, 2005
Cloth: 978-0-299-21420-3
A search for roots and identity has rarely been captured with such irony, unusual insight, and surprising humor as in this memoir of heartbreak and hope. Today a distinguished American poet, Colette Inez first came to the United States when she was eight years old, as an apparent Belgian orphan escorted by two complete strangers. Growing up in post–World War II America, a stranger to her own past, she survived a harrowing adolescence and an increasingly menacing, abusive adoptive family by learning to define her single solace: a developing passion for literature.
Facing possible deportation in the 1950s, Inez set out to prove her claim to U.S. citizenship. The result, as she recounts in this eloquent, wrenching memoir, would span two continents, a trail of discovery, and a buried secret: one that ultimately allowed Inez to reconcile her past and present and finally come of age as an artist.
AUTHOR BIOGRAPHY

Colette Inez is associate professor in the writing program at Columbia University. Her nine books of poetry include The Woman Who Loved Worms, Alive and Taking Names, Clemency, and Spinoza Doesn’t Come Here Anymore. Inez is the recipient of numerous awards and has received fellowships from the Guggenheim and Rockefeller Foundations and twice from the National Endowment for the Arts.

REVIEWS
“Colette Inez becomes the detective who must be shrewd and even deceptive to gain the truth about her origins. To say that her childhood was Dickensian almost seems an understatement, but she tells her story without self-pity, as if in writing it she can stand above or beyond her former self. A remarkable story of survival and discovery.”—James McConkey, author of Court of Memory and editor of The Anatomy of Memory


“Colette Inez spins a story whose themes are epic, but also intimate, personal, and entirely true. This is one of the loveliest, most heartfelt memoirs I’ve read, charting a woman’s search for her past and ultimately herself . . . in a transcendent celebration of wit and intellect.”—A. M. Homes, author of Things You Should Know and The Safety of Objects


"In this fabulous memoir, Colette Inez gives us a treat for all our senses. This is beautiful work."—Carolyn See, author of Making a Literary Life