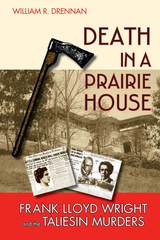 The most pivotal and yet least understood event of Frank Lloyd Wright’s celebrated life involves the brutal murders in 1914 of seven adults and children dear to the architect and the destruction by fire of Taliesin, his landmark residence, near Spring Green, Wisconsin. Unaccountably, the details of that shocking crime have been largely ignored by Wright’s legion of biographers—a historical and cultural gap that is finally addressed in William Drennan’s exhaustively researched Death in a Prairie House: Frank Lloyd Wright and the Taliesin Murders.
In response to the scandal generated by his open affair with the proto-feminist and free love advocate Mamah Borthwick Cheney, Wright had begun to build Taliesin as a refuge and "love cottage" for himself and his mistress (both married at the time to others).
Conceived as the apotheosis of Wright’s prairie house style, the original Taliesin would stand in all its isolated glory for only a few months before the bloody slayings that rocked the nation and reduced the structure itself to a smoking hull.
Supplying both a gripping mystery story and an authoritative portrait of the artist as a young man, Drennan wades through the myths surrounding Wright and the massacre, casting fresh light on the formulation of Wright’s architectural ideology and the cataclysmic effects that the Taliesin murders exerted on the fabled architect and on his subsequent designs.
Best Books for General Audiences, selected by the American Association of School Librarians, and Outstanding Book, selected by the Public Library Association
AUTHOR BIOGRAPHY
William R. Drennan (1944–2015) was professor emeritus of English at the University of Wisconsin–Baraboo/Sauk County and adjunct instructor in the Department of English at Appalachian State University, in Boone, North Carolina.
REVIEWS

"Death in a Prairie House is a compelling argument in support of the theory that the Taliesin tragedy profoundly affected not only the future lives of those directly involved (not the least of whom was considered to be the most influential and gifted architect of the time), but likely, the whole course and development of modern architecture."—Craig Jacobsen, Taliesin Preservation, Inc.

"The thoroughness of Drennan's research combined with the clarity of his logic and writing style paints a complete, colorful picture of the tragedy. He painstakingly addresses all of the questions and theories that have puzzled many for more than ninety years."—Carla Lind, author of The Wright Style: Re-Creating the Spirit of Frank Lloyd Wright and Lost Wright

"A fascinating, insightful examination of a Wisconsin 'crime of the century,' a bizarre and tragic event that changed Wright's life, his career, and perhaps even American residential and architectural design.”—Bill Christofferson, journalist and author of The Man from Clear Lake