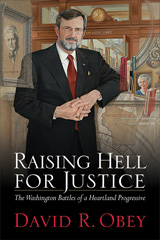 David Obey has in his nearly forty years in the U.S. House of Representatives worked to bring economic and social justice to America’s working families. In 2007 he assumed the chair of the Appropriations Committee and is positioned to pursue his priority concerns for affordable health care, education, environmental protection, and a foreign policy consistent with American democratic ideals.
Here, in his autobiography, Obey looks back on his journey in politics beginning with his early years in the Wisconsin Legislature, when Wisconsin moved through eras of shifting balance between Republicans and Democrats. On a national level Obey traces, as few others have done, the dramatic changes in the workings of the U.S. Congress since his first election to the House in 1969. He discusses his own central role in the evolution of Congress and ethics reforms and his view of the recent Bush presidency—crucial chapters in our democracy, of interest to all who observe politics and modern U.S. history.
Best Books for Regional General Audiences, selected by the American Association of School Librarians, and Best Books for General Audiences, selected by the Public Library Association
AUTHOR BIOGRAPHY
David R. Obey (D-Wausau) is the longest-serving member of the U.S. Congress in Wisconsin history and is the current chair of the House Appropriations Committee.  In the 1980s and early 1990s, he chaired the Foreign Operations Subcommittee, which funded America’s economic and political response to the collapse of the Soviet Union.
REVIEWS

"Dave Obey’s story reminds us that in a city of quicksand it is still possible to stand on principle as a servant of your ideals and the public.”—Bill Moyers, author of Moyers on America

“More than a shrewd and candid inside look at Congress, written by a gutsy battler for liberal causes and a man with a rich appreciation for the foibles of his colleague, Obey has produced a great testament to the enduring values of our system of representative government, a reminder of what public service can really mean when rendered by a person of courage and character.”—David S. Broder, Pulitzer Prize-winning columnist for the Washington Post

“Raising Hell for Justice is a powerful and enlightening political memoir by one of America’s all-time great legislators. Obey is one of a vanishing breed in Congress whose entire career in public life has been committed to both advancing a principled agenda and working constructively with colleagues on both sides of the aisle to hammer out agreements that advance that agenda. Obey burns with a passion sparked by his childhood experience growing up in an economically vulnerable working class family and channeled into politics and policy-making by his embrace of Catholic social justice and La Follette progressivism. His compelling memoir demonstrates how ennobling and satisfying a career in the first branch of government can be.”—Thomas E. Mann, W. Averell Harriman Chair and senior fellow in governance studies, Brookings Institution