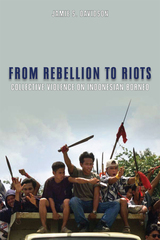 From Rebellion to Riots is a critical analysis of the roots of contemporary violence in one of Indonesia’s most ethnically heterogeneous provinces, West Kalimantan. Since the late 1960s, this province has suffered periodic outbreaks of ethnic violence among its Dayak, Malay, Madurese, and ethnic Chinese populations. Citing evidence from his research, internal military documents, and ethnographic accounts, Jamie S. Davidson refutes popular explanations for these flare-ups. The recurrent violence has less to do with a clash of cultures, the ills of New Order-led development, or indigenous marginalization than with the ongoing politicization of ethnic and indigenous identity in the region.
Looking at key historical moments, markedly different in their particulars, Davidson reveals the important links between ethnic violence and subnational politics. In one case, army officers in Soeharto’s recently established New Order regime encouraged anti-Chinese sentiments. To move against communist-inspired rebellion, they recruited indigenous Dayaks to expunge tens of thousands of ethnic Chinese from interior towns and villages. This counter-insurgent bloodshed inadvertently initiated a series of clashes between Dayaks and Madurese, another migrant community. Driven by an indigenous empowerment movement and efforts by local elites to control benefits provided by decentralization and democratization, these low-intensity riots rose to immense proportions in the late 1990s. From Rebellion to Riots demonstrates that the endemic violence in this vast region is not the inevitable outcome of its ethnic diversity, and reveals that the initial impetus for collective bloodshed is not necessarily the same as the forces that sustain it.

“A comprehensive case study . . . . Essential reading for students of the West Kalimantan violence.”—Dave McRae, Indonesia
AUTHOR BIOGRAPHY
Jamie S. Davidson is assistant professor of political science at the National University of Singapore. He is the co-editor of Deployment of Tradition: Adat and Politics in Indonesia from Colonialism to Indigenism.

“Fascinating. Davidson’s careful historical examination of this decades-long sequence of riots deserves to be read by anyone interested in ethnic conflict and violence. I learned a great deal.”—Donald L. Horowitz, Duke University

“Jamie Davidson's careful research should finally lay to rest the notion that the violent challenges to Indonesia's democratic transition can be explained by conventional national-level political studies. Thoroughly grounded in both the burgeoning theoretical literature on ethnic violence and the turbulent history of western Borneo, this nuanced study shows the need to disaggregate such vast entities as Indonesia to understand the ‘tipping points’ towards violence.”–Anthony Reid, Asia Research Institute, National University of Singapore

“Path-breaking. Davidson assesses the prior scholarship on ethnic violence and challenges much of the conventional wisdom, in a manner that has both insight and considerable value.”—Michael Leigh, University of Melbourne