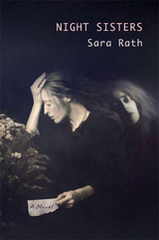 Nell Grendon never thought about communing with the dead when she was growing up in Little Wolf, Wisconsin; she was more concerned with slumber parties, boys, and the Lord’s Prayer Ring she won (dishonestly) in a Methodist Bible Bee. But when a chance visit to the eccentric but charming Wocanaga Spiritualist Camp brings the adult Nell face-to-face with the elderly medium Grace Waverly, she cannot resist the temptation to learn more about spirit mediumship.
Nell intends to fake her intuitive talents, but soon she spontaneously channels Angella Wing, an actress from the 1920s once known as the “Woman of a Thousand Voices.” Nell attempts to conceal her occult interests from skeptical friends, including George, a handsome jazz musician who rents an apartment in her historic home, and Polly, a childhood friend with buried anguish of her own. But soon Angella’s mischievous presence begins to make Nell’s life more and more difficult, eventually attracting shadows of Nell’s past. As she tries to free herself from Angella’s influence, Nell is forced into an investigation of a mysterious death at the very heart of her childhood—and the revelation of surprisingly dark secrets.
AUTHOR BIOGRAPHY
Sara Rath is the author of the best-selling novel Star Lake Saloon and Housekeeping Cottages, as well as four volumes of poetry and five nonfiction books, including The Complete Cow. She has also written for television and film. She lives in Spring Green, Wisconsin.
REVIEWS
“Rath’s portrayal of mediumship’s humorous moments is laugh-out-loud funny. She captures a side of Spiritualism that few outsiders are aware of and that no story about them can be complete without.”—Christine Wicker, author of Lily Dale: The True Story of the Town that Talks to the Dead