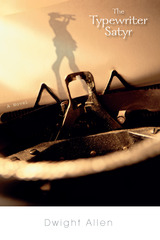 Welcome to Midvale, a city of liberal-minded (but not too liberal-minded) folk in the heart of Wisconsin. Midvale is home to Oliver Poole, lanky and gray-haired father of four sons, husband of Diana (a prominent divorce lawyer), left fielder for an over-the-hill softball team called the Old Hatters, and sole proprietor of a typewriter repair shop (a trade that one of his sons compares to singing folk music on the street and waiting for someone to drop a nickel in the hat). Midvale is home, too, to Annelise Scharfenberg, a thirty-something, sugar-craving, aspiring Buddhist who works as a late-night music-and-gab-show host at a fringe radio station. When Annelise, a collector of old-fashioned things, walks into Oliver’s shop bearing a typewriter scavenged from an alley, a romance ensues, with consequences both comic and tragic. Set during the early years of the Iraq war, The Typewriter Satyr is flush with colorful characters, including a Syrian coffeehouse owner who believes the Bush government is after him, a Buddhist monk who grew up in rural Wisconsin, a painter known as the Rabbit Master, and a homeless writer who roams the streets of Midvale in search of a missing shoe. In The Typewriter Satyr Dwight Allen has created a world that, as the novelist Michelle Huneven notes, “speaks to the powerful tides of longing and loneliness surging through all of us.”
Honorable Mention, Anne Powers Book Length Fiction, Council for Wisconsin Writers

Finalist, General Fiction, Midwest Book Awards
AUTHOR BIOGRAPHY
Dwight Allen is author of the highly praised story collection The Green Suit (a “wonder of a book,” said the Los Angeles Times) and a novel entitled Judge (said by T. Coraghessan Boyle to be “one of the most accomplished first novels I’ve ever read”). A graduate of Lawrence University and of the University of Iowa Writers’ Workshop, where he was a Teaching-Writing Fellow, Allen was on the editorial staff of The New Yorker for close to a decade. His short stories and essays have appeared in numerous journals and anthologies. He lives in Madison, Wisconsin.
REVIEWS

“A marvelous joyride through the streets of misbegotten love. This wise and beguiling novel is filled with a star-crossed cast of characters who circle each other, eternally trying to connect, providing humor, grief, and insight along the way. A fabulous read.”—Diana Abu-Jaber, author of Arabian Jazz, Crescent, and Origin

“Like the work of John Irving and Charles Baxter, Dwight Allen’s novel shows us the joys and follies of romance in ways highly entertaining and deeply moving. His characters seem like old friends, and his rich prose creates such a wonderfully cinematic world that by novel’s end I hated to leave it. A great book.”—Steven Carter, author of Famous Writers School and I Was Howard Hughes

“Allen writes about . . . ordinary life with such pleasing, perceptive assurance that it becomes revelatory.”—The New Yorker