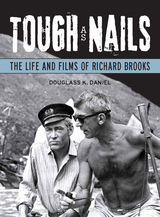 Called “God’s angry man” for his unyielding demands in pursuit of personal and artistic freedom, Oscar-winning filmmaker Richard Brooks brought us some of the mid-twentieth century’s most iconic films, including Blackboard Jungle, Cat on a Hot Tin Roof, Elmer Gantry, In Cold Blood, and Looking for Mr. Goodbar. “The important thing,” he once remarked, “is to write your story, to make it believable, to make it live.” His own life story has never been fully chronicled, until now.
Tough as Nails: The Life and Films of Richard Brooks restores to importance the career of a prickly iconoclast who sought realism and truth in his films. Douglass K. Daniel explores how the writer-director made it from the slums of Philadelphia to the heights of the Hollywood elite, working with the top stars of the day, among them Humphrey Bogart, Cary Grant, Elizabeth Taylor, Jean Simmons, Sidney Poitier, Sean Connery, Gene Hackman, and Diane Keaton. Brooks dramatized social issues and depicted characters in conflict with their own values, winning an Academy Award for his Elmer Gantry screenplay and earning nominations for another seven Oscars for directing and screenwriting.
Tough as Nails offers illuminating insights into Brooks’s life, drawing on unpublished studio memos and documents and interviews from stars and colleagues, including Poitier, director Paul Mazursky, and Simmons, who was married to Brooks for twenty years. Daniel takes readers behind the scenes of Brooks’s major films and sheds light on their making, their compromises, and their common threads. Tough as Nails celebrates Brooks’s vision while adding to the critical understanding of his works, their flaws as well as their merits, and depicting the tumults and trends in the life of a man who always kept his own compass.

Best Books for General Audiences, selected by the American Association of School Librarians

Douglass K. Daniel is a writer and editor with the Associated Press. He is author of Harry Reasoner: A Life in the News and Lou Grant: The Making of TV’s Top Newspaper Drama.


“Mr. Daniel has captured the essence of the artist known as Richard Brooks. The struggle of the Outsider who became an Insider in Hollywood in spite of being a ruffian cannot be put down. I admired Mr. Brooks when I worked with him and through this wonderful book I grew to love him.”—Shirley Knight, actress


“Douglass Daniel has nailed Richard Brooks. It is high time for this engrossing and revelatory account of his life, his work and his creative drive. This places Brooks where he rightfully belongs, among the greats of cinema history.”—Scott Wilson, actor who portrayed Dick Hickock in In Cold Blood

1. Hollywood by Way of Philadelphia

2. Writing Movies at Home and at War

3. Swell Guys, Brutes, and the Blacklist

4. In the Director's Chair at MGM

5. Writing and Rocking around the Clock

6. Taking Literature from Page to Screen

7. Independence and That Old-Time Religion

8. Two Hits and One Major Miss

9. A Journey into Capote Country

10. On Marriage, Larceny, and America's Beauty

The Happy Ending / $ / Bite the Bullet