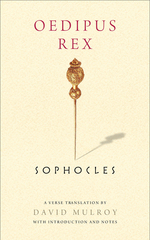 Oedipus Rex is the greatest of the Greek tragedies, a profound meditation on the human condition. The story of the mythological king, who is doomed to kill his father and marry his mother, has resonated in world culture for almost 2,500 years. But Sophocles’ drama as originally performed was much more than a great story—it was a superb poetic script and exciting theatrical experience. The actors spoke in pulsing rhythms with hypnotic forward momentum, making it hard for audiences to look away. Interspersed among the verbal rants and duels were energetic songs performed by the chorus.

Sophocles(ca. 497/6–407/6 BCE) was the most acclaimed dramatist of his era, winning more than twenty festival competitions in ancient Athens. He is believed to have written 123 plays, but only seven have survived in a complete form. David Mulroy is professor of classics at the University of Wisconsin–Milwaukee. He has translated The Complete Poetry of Catullus, also published by the University of Wisconsin Press.

Appendix 1. The Riddle of the Sphinx