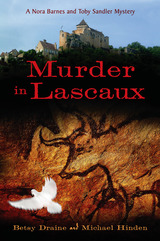 The cave of Lascaux may be closed to the public, but five scholars a day are allowed inside, and Nora Barnes has finagled an appointment. True, she may have fudged a bit in her letter to the authorities, but she does teach art history, and she isn’t about to miss her chance to see the world’s most famous prehistoric paintings. Nora and her high-spirited husband, Toby, are visiting the Dordogne, in the southern French region of the Aquitaine. Aware that the Dordogne’s renown for cave art is matched only by its reputation for delicious cuisine, the couple has also signed up for a cooking class at a nearby château, but they soon find that more than food is on their minds.
During their tour of the cave, another visitor is murdered. When the local inspector pegs Nora and Toby as suspects, they embark on a mission to solve the crime, tracing strange links between a Cro-Magnon symbol and a thirteenth-century religious cult. As they match wits with the crusty inspector, Nora finds herself immersed in the notebooks of a forgotten artist who once lived in the château. In sifting through the artist’s papers and uncovering old secrets, she begins to piece together the motives for the murder. But has she cooked up more trouble than she can handle?

Best Books for General Audiences, selected by the American Association of School Librarians