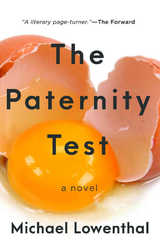 Pat Faunce yearns for more than his carefree New York life and his open relationship with Stu, an airline pilot. Above all, he wants to be a father. He persuades a reluctant Stu to move to Cape Cod, where they enlist Debora, a charismatic Brazilian immigrant, as a surrogate mother. But the men's attempt to have a child creates new emotional complications—with Stu's parents and sister, with Debora and her husband, and with each other. Building to a harrowing conclusion, this fearless, darkly funny novel asks whether making a new family is worth risking the one you have.
AUTHOR BIOGRAPHY
Michael Lowenthal is the author of three previous novels: Charity Girl, Avoidance, and The Same Embrace. He is a core faculty member in Lesley University's MFA program in creative writing and lives in Boston, Massachusetts.
TABLE OF CONTENTS
Contents
One
Two
Three
Four
Five
Six
Seven
Eight
Nine
Ten
Eleven
Twelve
Thirteen
Fourteen
Fifteen
Sixteen
Seventeen
Eighteen
Nineteen
Twenty
Twenty-one
Twenty-two
Twenty-three
Twenty-four
Twenty-five
Twenty-six
Twenty-seven
Acknowledgements
REQUEST ACCESSIBLE FILE