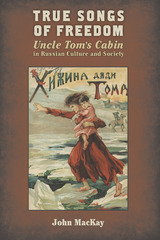 Harriet Beecher Stowe's 1852 antislavery novel Uncle Tom's Cabin was the nineteenth century's best-selling novel worldwide; only the Bible outsold it. It was known not only as a book but through stage productions, films, music, and commercial advertising as well. But how was Stowe's novel—one of the watershed works of world literature—actually received outside of the American context?
True Songs of Freedom explores one vital sphere of Stowe's influence: Russia and the Soviet Union, from the 1850s to the present day. Due to Russia's own tradition of rural slavery, the vexed entwining of authoritarianism and political radicalism throughout its history, and (especially after 1945) its prominence as the superpower rival of the United States, Russia developed a special relationship to Stowe's novel during this period of rapid societal change. Uncle Tom's Cabin prompted widespread reflections on the relationship of Russian serfdom to American slavery, on the issue of race in the United States and at home, on the kinds of writing appropriate for children and peasants learning to read, on the political function of writing, and on the values of Russian educated elites who promoted, discussed, and fought over the book for more than a century. By the time of the Soviet Union's collapse in 1991, Stowe's novel was probably better known by Russians than by readers in any other country.
John MacKay examines many translations and rewritings of Stowe's novel; plays, illustrations, and films based upon it; and a wide range of reactions to it by figures famous (Leo Tolstoy, Ivan Turgenev, Marina Tsvetaeva) and unknown. In tracking the reception of Uncle Tom's Cabin across 150 years, he engages with debates over serf emancipation and peasant education, early Soviet efforts to adapt Stowe's deeply religious work of protest to an atheistic revolutionary value system, the novel's exploitation during the years of Stalinist despotism, Cold War anti-Americanism and antiracism, and the postsocialist consumerist ethos.
AUTHOR BIOGRAPHY
John MacKay is professor of Slavic and East European languages and literatures and film studies and chair of the film studies program at Yale University. He is author of Inscription and Modernity: From Wordsworth to Mandelstam and editor and translator of Four Russian Serf Narratives.
TABLE OF CONTENTS