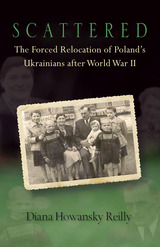 Following World War II, the communist government of Poland forcibly relocated the country's Ukrainian minority by means of a Soviet-Polish population exchange and then a secretly planned action code-named Operation Vistula. In Scattered, Diana Howansky Reilly recounts these events through the experiences of three siblings caught up in the conflict, during a turbulent period when compulsory resettlement was a common political tactic used against national minorities to create homogenous states.
Born in the Lemko region of southeastern Poland, Petro, Melania, and Hania Pyrtej survived World War II only to be separated by political decisions over which they had no control. Petro relocated with his wife to Soviet Ukraine during the population exchange of 1944–46, while his sisters Melania and Hania were resettled to western Poland through Operation Vistula in 1947. As the Ukrainian Insurgent Army fought resettlement, the Polish government meanwhile imprisoned suspected sympathizers within the Jaworzno concentration camp. Melania, Reilly's maternal grandmother, eventually found her way to the United States during Poland's period of liberalization in the 1960s.
Drawing on oral interviews and archival research, Reilly tells a fascinating, true story that provides a bottom-up perspective and illustrates the impact of extraordinary historical events on the lives of ordinary people. Tracing the story to the present, she describes survivors' efforts to receive compensation for the destruction of their homes and communities.

Finalist in History, Foreword Books of the Year

AUTHOR BIOGRAPHY
Diana Howansky Reilly has master's degrees from Johns Hopkins University, in international affairs, and from the Columbia University Graduate School of Journalism. She lives in Connecticut.
TABLE OF CONTENTS


Acknowledgments
Introduction
Note on Transliteration
Prologue: The Realization
Caught on the Battlefield of World War II
The Reality of the Soviet-Polish Population Exchange
Operation Vistula: The Solution to the "Ukrainian Problem"
Prisoners in the Central Labor Camp in Jaworzno
A New Home in the Recovered Territories?
Epilogue: The "Compensation"
Notes
Index