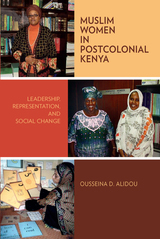 In education, journalism, legislative politics, social justice, health, law, and other arenas, Muslim women across Kenya are emerging as leaders in local, national, and international contexts, advancing reforms through their activism. Muslim Women in Postcolonial Kenya draws on extensive interviews with six such women, revealing how their religious and moral beliefs shape reform movements that bridge ethnic divides and foster alliances in service of creating a just, multicultural, multiethnic, and multireligious democratic citizenship.
Mwalim Azara Mudira opened a school of theology for Muslim women. Nazlin Omar Rajput of The Nur magazine was a pioneer in reporting on HIV/AIDS in the Muslim community. Amina Abubakar, host of a women's radio show, has publicly addressed the sensitive subject of sexual crimes against Muslim women. Two women who are members of parliament are creating new socioeconomic and political opportunities for girls and women, within a framework that still embraces traditional values of marriage and motherhood.
Examining the interplay of gender, agency, and autonomy, Ousseina D. Alidou shows how these Muslim women have effected change in the home, the school, the mosque, the media, and more—and she illuminates their determination as actors to challenge the oppressive influences of male-dominated power structures. In looking at differences as opportunities rather than obstacles, these women reflect a new sensibility among Muslim women and an effort to redefine the meaning of women's citizenship within their own community of faith and within the nation.
AUTHOR BIOGRAPHY
Ousseina D. Alidou is the Director of the Center for African Studies at Rutgers University–New Brunswick and an associate professor in the department of African, Middle Eastern, and South Asian Languages and Literatures. She is the author and editor of many books, including Engaging Modernity: Muslim Women and the Politics of Agency in Postcolonial Niger and Post-Conflict Reconstruction in Africa.
REVIEWS
"Alidou introduces readers to extraordinary Kenyan Muslim women who deftly weave together secular, religious, and activist perspectives to transform their communities. Their stories, and Alidou's astute analysis, portray the challenges facing twenty-first-century agents of change."—Susan Hirsch, author of Pronouncing and Persevering: Gender and the Discourses of Disputing in an African Islamic Court


“A brilliant work fashioned from the lived experiences and critical reflections of Muslim women as transformative leaders negotiating the secular and religious in their public and private lives. Brimming with insights for our polarized nations in turbulent times, this is a must-read book for anyone concerned with Kenya, Africa as a whole, and Muslim societies beyond.”—Margot Badran, author of Gender and Islam in Africa


“With rich ethnographic data, Ousseina Alidou has written another excellent and highly readable book, highlighting the creative agency of the multifaceted and multiracial community of Kenyan Muslim women.”—Shahla Haeri, author of No Shame for the Sun: Lives of Professional Pakistani Women