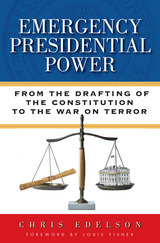 Can a U.S. president decide to hold suspected terrorists indefinitely without charges or secretly monitor telephone conversations and e-mails without a warrant in the interest of national security? Was the George W. Bush administration justified in authorizing waterboarding? Was President Obama justified in ordering the killing, without trial or hearing, of a U.S. citizen suspected of terrorist activity? Defining the scope and limits of emergency presidential power might seem easy—just turn to Article II of the Constitution. But as Chris Edelson shows, the reality is complicated. In times of crisis, presidents have frequently staked out claims to broad national security power. Ultimately it is up to the Congress, the courts, and the people to decide whether presidents are acting appropriately or have gone too far.
Drawing on excerpts from the U.S. Constitution, Supreme Court opinions, Department of Justice memos, and other primary documents, Edelson weighs the various arguments that presidents have used to justify the expansive use of executive power in times of crisis. Emergency Presidential Power uses the historical record to evaluate and analyze presidential actions before and after the terrorist attacks of September 11, 2001. The choices of the twenty-first century, Edelson concludes, have pushed the boundaries of emergency presidential power in ways that may provide dangerous precedents for current and future commanders-in-chief.

AUTHOR BIOGRAPHY
Chris Edelson is assistant professor of government at American University's School of Public Affairs. He practiced law in the District of Columbia and New York and served as state legislative director for the Human Rights Campaign in Washington, D.C.
REVIEWS
"Chris Edelson has successfully tackled a big and controversial topic with skill and grace. His balanced, fair-minded work is a welcome addition to a literature on presidential power in times of crisis that is often captured by partisans with a cause."—Michael Genovese, author of Presidential Prerogative


“Edelson . . . lays down a foundation from which the current debate about the powers of the presidency can be more clearly understood.”—Kirkus Reviews