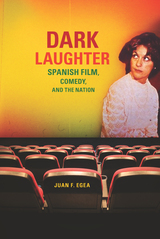 In Dark Laughter, Juan F. Egea provides a remarkable in-depth analysis of the dark comedy film genre in Spain, as well as a provocative critical engagement with the idea of national cinema, the visual dimension of cultural specificity, and the ethics of dark humor.

Egea begins his analysis with General Franco's dictatorship in the 1960s—a regime that opened the country to new economic forces while maintaining its repressive nature—exploring key works by Luis García Berlanga, Marco Ferreri, Fernando Fernán-Gómez, and Luis Buñuel. Dark Laughter then moves to the first films of Pedro Almodóvar in the early 1980s during the Spanish political transition to democracy before examining Alex de la Iglesia and the new dark comedies of the 1990s. Analyzing this younger generation of filmmakers, Egea traces dark comedy to Spain's displays of ultramodernity such as the Universal Exposition in Seville and the Barcelona Olympic Games.

At its core, Dark Laughter is a substantial inquiry into the epistemology of comedy, the intricacies of visual modernity, and the relationship between cinema and a wider framework of representational practices.

AUTHOR BIOGRAPHY
Juan F. Egea is a professor in the department of Spanish and Portuguese at the University of Wisconsin–Madison. He is the author of La poesía del nosotros: Jaime Gil de Biedma y la secuencia lírica moderna. He has also published extensively on Spanish film, poetry, and culture.
TABLE OF CONTENTS