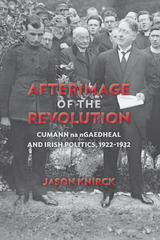 Ascending to power after the Anglo-Irish Treaty and a violent revolution against the United Kingdom, the political party Cumann na nGaedheal governed during the first ten years of the Irish Free State (1922–32). Taking over from the fallen Michael Collins and Arthur Griffith, Cumann na nGaedheal leaders such as W. T. Cosgrave and Kevin O'Higgins won a bloody civil war, created the institutions of the new Free State, and attempted to project abroad the independence of a new Ireland.
In response to the view that Cumann na nGaedheal was actually a reactionary counterrevolutionary party, Afterimage of the Revolution contends that, in building the new Irish state, the government framed and promoted its policies in terms of ideas inherited from the revolution. In particular, Cumann na nGaedheal emphasized Irish sovereignty, the "Irishness" of the new state, and a strong sense of anticolonialism, all key components of the Sinn Féin party platform during the revolution. Jason Knirck argues that the 1920s must be understood as part of a continuing Irish revolution that led to an eventual independent republic. Drawing on state documents, newspapers, and private papers—including the recently released papers of Kevin O'Higgins—he offers a fresh view of Irish politics in the 1920s and integrates this period more closely with the Irish Revolution.
AUTHOR BIOGRAPHY
Jason Knirck is an associate professor of history at Central Washington University and the author of Women of the Dáil: Gender, Republicanism and the Anglo-Irish Treaty and Imagining Ireland’s Independence.
TABLE OF CONTENTS