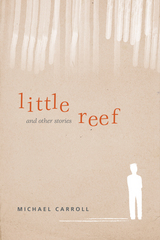 Little Reef and Other Stories announces the arrival of an original voice in literature. From Key West to Maine, Michael Carroll’s debut collection of stories depicts the lives of characters who are no longer provincial but are not yet cosmopolitan. These women and their gay male friends are “B-listers” of a new, ironic, media-soaked culture. They live in a rich but increasingly divided America, a weirdly paradoxical country increasingly accepting of gay marriage but still marked by prejudice, religious strictures, and swaths of poverty and hopelessness. Carroll shows us people stunned by the shock of the now, who have forgotten their pasts and can’t envision a future.


Part One: After Dallas
From the Desk of . . . Hunter B. Gwathmey
Referred Pain
Barracuda
Her Biographers
Little Reef
Pascagoula
Werewolf