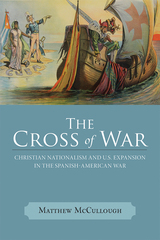 The Cross of War documents the rise of “messianic interventionism”—the belief that America can and should intervene altruistically on behalf of other nations. This stance was first embraced in the Spanish-American War of 1898, a war that marked the dramatic emergence of the United States as an active world power and set the stage for the foreign policy of the next one hundred years. Responding to the circumstances of this war, an array of Christian leaders carefully articulated and defended the notion that America was responsible under God to extend freedom around the world—by force, if necessary. Drawing from a wide range of sermons and religious periodicals across regional and denominational lines, Matthew McCullough describes the ways that many American Christians came to celebrate military intervention as a messianic sacrifice, to trace the hand of God in a victory more painless and complete than anyone had imagined, and to justify the shift in American foreign policy as a divine calling.
AUTHOR BIOGRAPHY
Matthew McCullough earned a PhD in American religious history from Vanderbilt University and serves as the pastor of Trinity Church in Nashville, Tennessee.
TABLE OF CONTENTS

Introduction
1 "The Cross of War": Justifying a New Kind of Sacrifice, Defining a New Kind of War
2 Clash of Civilizations: Spain As Enemy and the Crystallization of American Messianism
3 "The Hand of God in the Nation's Victory": Providence, American Success, and the Meaning of National History
4 To Anglo-Saxonize the World: Racial Providentialism and the American Mission
5 Duty and Destiny: Messianic Interventionism and the Ideology of American Expansion
Conclusion