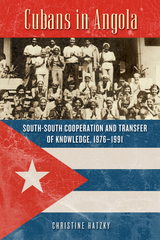 Angola, a former Portuguese colony in southern central Africa, gained independence in 1975 and almost immediately plunged into more than two decades of conflict and crisis. Fidel Castro sent Cuban military troops to Angola in support of the Movimento Popular de Libertação de Angola (MPLA), leading to its ascension to power despite facing threats both international and domestic. What is less known, and what Cubans in Angola brings to light, is the significant role Cubans played in the transformation of civil society in Angola during these years. Offering not just military support but also political, medical, administrative, and technical expertise as well as educational assistance, the Cuban presence in Angola is a unique example of transatlantic cooperation between two formerly colonized nations in the global South.
AUTHOR BIOGRAPHY
Christine Hatzky is a professor at the Leibniz Universität Hannover. She is a historian specializing in postcolonial Latin America and the Caribbean as well as Lusophone Africa, especially Angola. Cubans in Angola is a translation of her German-language Kubaner in Angola, revised and updated for an English-speaking audience.
TABLE OF CONTENTS