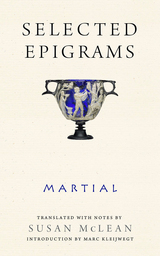 This lively translation accurately captures the wit and uncensored bawdiness of the epigrams of Martial, who satirized Roman society, both high and low, in the first century CE. His pithy little poems amuse, but also offer vivid insight into the world of patrons and clients, doctors and lawyers, prostitutes, slaves, and social climbers in ancient Rome. The selections cover nearly a third of Martial's 1,500 or so epigrams, augmented by an introduction by historian Marc Kleijwegt and informative notes on literary allusion and wordplay by translator Susan McLean.

Finalist, Literary Translation Award, PEN Center USA
AUTHOR BIOGRAPHY
Marcus Valerius Martialis, or Martial (ca. 40–104 CE), made his way to Rome from Iberia (now Spain) and won renown across the Empire for his humorous epigrams. Susan McLean is a professor of English at Southwest Minnesota State University. She won the 2014 Donald Justice Poetry Prize for a collection of her own poems, The Whetstone Misses the Knife, and in 2009 her collection The Best Disguise won the Richard Wilbur Award.
TABLE OF CONTENTS


Foreword
Marc Kleijwegt
A Note on the Translation