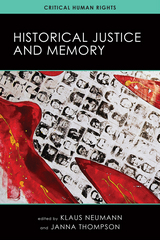 Historical Justice and Memory highlights the global movement for historical justice—acknowledging and redressing historic wrongs—as one of the most significant moral and social developments of our times. Such historic wrongs include acts of genocide, slavery, systems of apartheid, the systematic persecution of presumed enemies of the state, colonialism, and the oppression of or discrimination against ethnic or religious minorities.
The historical justice movement has inspired the spread of truth and reconciliation processes around the world and has pushed governments to make reparations and apologies for past wrongs. It has changed the public understanding of justice and the role of memory. In this book, leading scholars in philosophy, history, political science, and semiotics offer new essays that discuss and assess these momentous global developments. They evaluate the strength and weaknesses of the movement, its accomplishments and failings, its philosophical assumptions and social preconditions, and its prospects for the future.
AUTHOR BIOGRAPHY
Klaus Neumann is a professor at the Swinburne Institute for Social Research, Swinburne University of Technology, Australia. His six books include Shifting Memories: The Nazi Past in the New Germany. Janna Thompson is a professorial fellow in the Department of Politics and Philosophy at La Trobe University, Australia. She is the author of four books, including Intergenerational Justice: Rights and Responsibilities in an Intergenerational Polity.
TABLE OF CONTENTS


Introduction: Beyond the Legalist Paradigm
Klaus Neumann and Janna Thompson

Part I
1 Memory Culture and Human Rights: A New Constellation
Andreas Huyssen
2 Reparative Claims and Theories of Justice
Janna Thompson
3 The Political Field of Reparations
John Torpey
4 How the Past Matters: On the Foundations of an Ethics of Remembrance
Jeffrey Blustein