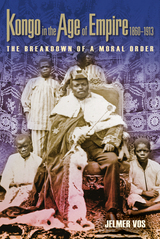 AUTHOR BIOGRAPHY
Jelmer Vos is an associate professor of history at Old Dominion University.
REVIEWS
"A Kongo-centered view of how the country entered into the Portuguese domains, but also how its elite guided that entrance with their own agenda. An insightful look at the onset of colonialism in Central Africa."—John K. Thornton, Boston University


“The Kongo kingdom holds a major place in the historiography of the Atlantic slave trade as well as in Atlantic history. . . . This study provides a fascinating, well-researched account placing Kongo dynastic rivalries at the center of the kingdom’s engagement with Portuguese colonialism. . . . Highly recommended.”—Choice


"A Kongo-centered view of how the country entered into the Portuguese domains, but also how its elite guided that entrance with their own agenda. An insightful look at the onset of colonialism in Central Africa." —John K. Thornton, Boston University