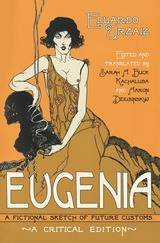 the story of a eugenically engineered society of the future.

It is the year 2218. In "Villautopia," the capital of a Central American nation, the

are implanted in males to increase a flagging population rate, and the offspring

are raised in state facilities until old enough to choose their own, nonnuclear

families. Sterilization of children with mental or physical abnormalities further

ensures the purity of the gene pool.

Aldous Huxley's Brave New World, Eugenia recounts the story of Ernesto, who at age twenty-three is selected as a breeder. Celiana, his thirty-eight-year-old lover

and an accomplished scholar, is deemed unfit for reproduction. To cope with

her feelings of guilt and hopelessness, she increasingly turns to marijuana, and

her scholarly productivity declines. Meanwhile Ernesto falls in love with a fellow

breeder, a young woman named Eugenia—but the life they ultimately choose is

not quite what the state had envisioned.

as well as its historical context. Arising from its twentieth-century origins, yet

remarkably contemporary, Eugenia is a treasure of speculative fiction.
AUTHOR BIOGRAPHY
Eduardo Urzaiz (1876–1955) was a Cuban-Mexican schoolteacher, gynecologist, obstetrician, artist, and student of psychiatry. Sarah A. Buck Kachaluba is a research librarian in the humanities at Florida State University and has a PhD in Latin American history. Aaron Dziubinskyj is an associate professor of modern languages at DePauw University.
REVIEWS
"A major contribution. Sarah A. Buck Kachaluba and Aaron Dziubinskyj have unearthed a powerful and crucial work in the literary history of Mexico, and they have created a precise, effective translation and a critical apparatus that encourages readers to engage with the story in novel and complex ways." —Cristina Rivera-Garza, author of No One Will See Me Cry