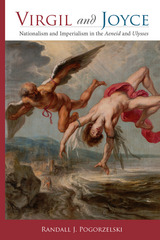 James Joyce’s Ulysses is a modern version of Homer’s Odyssey, but Joyce—who was a better scholar of Latin than of Greek—also was deeply influenced by the Aeneid, Virgil’s epic poem about the journey of Aeneas and the foundation of Rome.
Joyce wrote Ulysses during the Irish War of Independence, when militants, politicians, and intellectuals were attempting to create a new Irish nation. Virgil wrote the Aeneid when, in the wake of decades of civil war, Augustus was founding what we now call the Roman Empire. Randall Pogorzelski applies modern theories of nationalism, intertextuality, and reception studies to illuminate how both writers confronted issues of nationalism, colonialism, political violence, and freedom during times of crisis.
AUTHOR BIOGRAPHY
Randall J. Pogorzelski is an assistant professor of classical studies at the University of Western Ontario.
REVIEWS
“Demonstrates how Joyce’s complicated nationalism revolutionizes our present understanding of Virgil’s hesitant imperialism.”—Alexander Mueller, author of Translating Troy


“Joyce emerges here as a literary reader who rethinks Virgil’s Aeneid as a post-imperial epic, a poem about colonialism and national identity.”—Phiroze Vasunia, author of The Classics and Colonial India