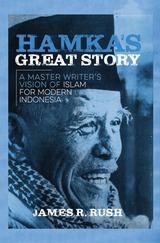 Hamka’s Great Story presents Indonesia through the eyes of an impassioned, popular thinker who believed that Indonesians and Muslims everywhere should embrace the thrilling promises of modern life, and navigate its dangers, with Islam as their compass.
Hamka (Haji Abdul Malik Karim Amrullah) was born when Indonesia was still a Dutch colony and came of age as the nation itself was emerging through tumultuous periods of Japanese occupation, revolution, and early independence. He became a prominent author and controversial public figure. In his lifetime of prodigious writing, Hamka advanced Islam as a liberating, enlightened, and hopeful body of beliefs around which the new nation could form and prosper. He embraced science, human agency, social justice, and democracy, arguing that these modern concepts comported with Islam’s true teachings. Hamka unfolded this big idea—his Great Story—decade by decade in a vast outpouring of writing that included novels and poems and chatty newspaper columns, biographies, memoirs, and histories, and lengthy studies of theology including a thirty-volume commentary on the Holy Qur’an. In introducing this influential figure and his ideas to a wider audience, this sweeping biography also illustrates a profound global process: how public debates about religion are shaping national societies in the postcolonial world.
AUTHOR BIOGRAPHY
James R. Rush is an associate professor of history at Arizona State University. He is the author of Opium to Java: Revenue Farming and Chinese Enterprise in Colonial Indonesia, 1860–1910, The Last Tree: Reclaiming the Environment in Tropical Asia, and numerous biographical essays about contemporary Asian activists, humanitarians, and public intellectuals in the Ramon Magsaysay Awards book series and website.
TABLE OF CONTENTS